Some weeks previous to the show, Willem Vlugt (one of France's two Jabiru Dealers) approached ST Aviation to invite UK Jabiru owners' to the large Ultralight show in Blois, France. Blois is between Orleans and Tours, and is situated in the very picturesque 'chateau' region of the Loire valley, about 200 nm south of Calais. The Blois show is roughly equivalent to the Annual Popham Microlight fair in UK, but is about twice as big an event.

On the Saturday morning, we met our 'hosts' Willem and Isabelle; they had driven the previous day for many hours from the South of France where they run a successful microlight club and school, as well as the Jabiru dealership. For once, the weather in the south was terrible, with low cloud and rain, whereas at the show it was CAVOK all weekend! Our Jabiru was displayed on the stand, and there was lots of interest in both the aeroplane and the engine, an example of which was displayed on its packing case in a prominent position. My French has never been too good (except for ordering beer, which I seem to be able to do effortlessly in most European countries), but over the weekend I learned to converse (very basically, with lots of arm waving) with other aviators in terms of the Jabiru's performance and attributes. One friendly guy insisted I tell him how many kilometres I had flown to the show, how much fuel I used and how long it took! I had to send him away while I got the rule out on the chart...........I nearly ran out of fingers and thumbs working it out, but he seemed impressed with the answer anyway. 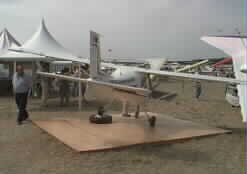 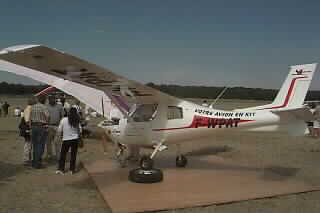 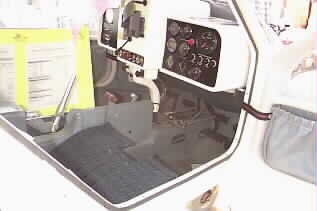 As well as the show, we were keen to 'sample some of the local ambience' which of course is made from grapes, and is coloured either red, or white. Ed and I took some 'time out' on the Sunday to visit a local winery  - the Chateau Monmousseau in nearby Montrichard on the Loire. Well worth a visit - they have 15km of tunnels for storing millions of bottles of fermenting wine - the temperature was a welcome 'cool' and we were free to roam around, but with a warning that it's very easy to get lost!

Our final trip home was taken in one 'hop', and having filed a flight plan at le Touquet, we let the south - westerly tail-wind speed our return to Riseley in just 1.5 hrs, an average speed of  96 kts.

I'm hoping that next year, there will be a bigger gathering of UK Jabirus flying - out to Blois. Thanks to Willem and Isabelle, Christian L'Homme and his wife, and the other organisers of the Blois show. It is highly professional, and well - worth a visit. There's also plenty to do, see, drink and eat, too!